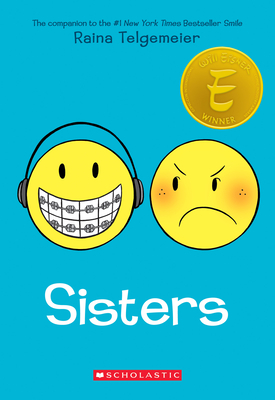 Raina Telgemeier's #1 New York Times bestselling, Eisner Award-winning companion to Smile!
Raina can't wait to be a big sister. But once Amara is born, things aren't quite how she expected them to be. Amara is cute, but she's also a cranky, grouchy baby, and mostly prefers to play by herself. Their relationship doesn't improve much over the years, but when a baby brother enters the picture and later, something doesn't seem right between their parents, they realize they must figure out how to get along. They are sisters, after all.

Raina uses her signature humor and charm in both present-day narrative and perfectly placed flashbacks to tell the story of her relationship with her sister, which unfolds during the course of a road trip from their home in San Francisco to a family reunion in Colorado.

Raina Telgemeier is the #1 New York Times bestselling, multiple Eisner Award–winning creator of Smile, Sisters, and Guts, which are all graphic memoirs based on her childhood. She is also the creator of Drama and Ghosts, and is the adapter and illustrator of the first four Baby-sitters Club graphic novels. Raina lives in the San Francisco Bay Area. To learn more, visit her online at goRaina.com.

* "A wonderfully charming tale of family and sisters that anyone can bond with." -- Kirkus Reviews, starred review

All events will be held virtually until further notice.
END_OF_DOCUMENT_TOKEN_TO_BE_REPLACED