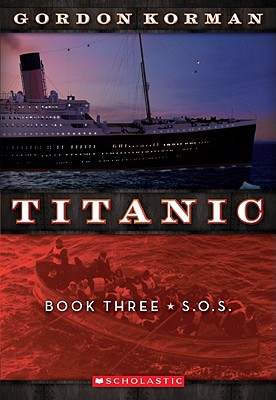 By Gordon Korman
$6.99
Email or call for price.

This is book number 3 in the Titanic series.

From bestselling author Gordon Korman, the thrilling conclusion to the adventure aboard the unluckiest ship of all.

The Titanic was supposed to be unsinkable - the largest passenger steamship in the world, one of the biggest and most luxurious ships ever to operate.

For Paddy, Sophie, Juliana, and Alfie, the Titanic is full of mysteries - whether they're to be found in the opulent first-class cabins and promenade decks or the shadows in the underbelly of the ship. Secrets and plans are about to be revealed - only now disaster looms, and time is running out. The four of them need to find the truth, unmask the killer...and try not to go down with the ship.

Gordon Korman is the author of The 39 Clues Book 2: One False Note, which debuted at #1 on the New York Times bestseller list, and The 39 Clues Book #8: The Emperor's Code. Gordon has written more than sixty books for kids and young adults, including Zoobreak, Swindle, and Son of the Mob, as well as the On the Run series and the Island, Everest, Dive, and Kidnapped trilogies. A native of Ontario, Canada, Korman now lives with his family in Long Island, New York.

All events will be held virtually until further notice.
END_OF_DOCUMENT_TOKEN_TO_BE_REPLACED