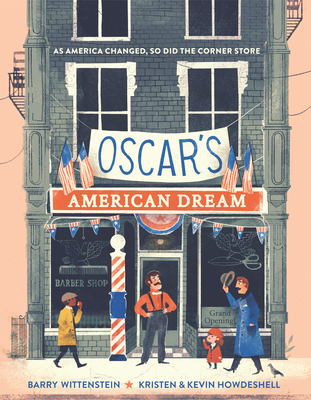 If you want to see 20th century American history unfold before your eyes, stand on a city street corner and watch it change! It all starts when an immigrant named Oscar opens a barber shop...

When Oscar lands on Ellis Island, he has only a suitcase and a down payment in his hands. And he has a dream-- to own his own barbershop. After it opens on the corner of Front St. and Second Ave, Oscar's barbershop becomes a beloved local fixture... until the day Oscar decides to move on and become a subway conductor. Over the years, this barbershop will change hands to become a lady's clothing store, then a soup kitchen. A coffee shop follows, then the space becomes an army recruitment center, then a candy shop. As the years pass and the world changes, the proud corner store stands tall, watching American history unfold around it. Barry Wittenstein and debut husband-and-wife illustration team Kristen and Kevin Howdeshell tell the rich, fascinating story of key moments in American history, as reflected through the eyes--and the patrons--of the corner store.

Barry Wittenstein is the author of Waiting for Pumpsie, which received a starred review from Kirkus Reviews. His follow-up picture book, The Boo-Boos That Changed the World, also received a starred review from Kirkus and was named a Kirkus Best Book of 2018. His upcoming titles include Sonny's Bridge, illustrated by Keith Mallett and A Place to Land, illustrated by Jerry Pinkney. Barry resides in New York City. Visit him on the web at onedogwoof.com and follow him on Twitter at @bwittbooks.

Kristen and Kevin Howdeshell are a husband-and-wife-illustrator duo based in Kansas City. They have their own studio, The Brave Union, and have taken on the freelance world or illustration, working on projects for magazines, packaging, t-shirts, educational purposes, and now, children's books. Visit them on the web at thebraveunion.com and find them on Instagram @thebraveunion.

All events will be held virtually until further notice.
END_OF_DOCUMENT_TOKEN_TO_BE_REPLACED