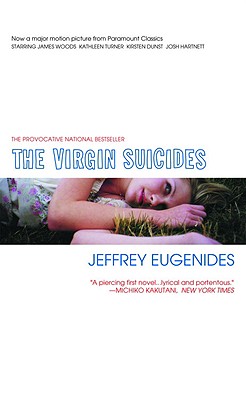 By Jeffrey Eugenides
Email or call for price.
Not in stock

Juxtaposing the most common and the most gothic, the humorous and the tragic, author Jeffrey Eugenides creates a vivid and compelling portrait of youth and lost innocence. He takes us back to the elm-lined streets of suburbia in the seventies, and introduces us to the men whose lives have been forever changed by their fierce, awkward obsession with five doomed sisters: brainy Therese, fastidious Mary, ascetic Bonnie, libertine Lux, and pale, saintly Cecilia, whose spectacular demise inaugurates "the year of the suicides." This is the debut novel that caused a sensation and won immediate acclaim from the critics-a tender, wickedly funny tale of love and terror, sex and suicide, memory and imagination.

All events will be held virtually until further notice.
END_OF_DOCUMENT_TOKEN_TO_BE_REPLACED