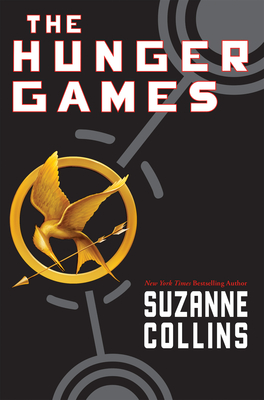 By Suzanne Collins
$18.99
Email or call for price.

This is book number 1 in the Hunger Games series.

“This compelling, page-turning futuristic novel takes readers into a world that pits teenagers against each other in a fight to the death for the glory and well-being of their district. But when Katniss discovers the young man from her district is in love with her, she is faced with either having to kill him to survive or sacrificing herself to save him.”
— David Richardson, The Blue Marble, Fort Thomas, KY

The first novel in the worldwide bestselling series by Suzanne Collins!Winning means fame and fortune. Losing means certain death. The Hunger Games have begun. . . . In the ruins of a place once known as North America lies the nation of Panem, a shining Capitol surrounded by twelve outlying districts. The Capitol is harsh and cruel and keeps the districts in line by forcing them all to send one boy and one girl between the ages of twelve and eighteen to participate in the annual Hunger Games, a fight to the death on live TV. Sixteen-year-old Katniss Everdeen regards it as a death sentence when she steps forward to take her sister's place in the Games. But Katniss has been close to dead before-and survival, for her, is second nature. Without really meaning to, she becomes a contender. But if she is to win, she will have to start making choices that weigh survival against humanity and life against love.

Suzanne Collins is the author of the bestselling Underland Chronicles series, which started with Gregor the Overlander. Her groundbreaking young adult novels, The Hunger Games, Catching Fire, and Mockingjay, were New York Times bestsellers, received wide praise, and were the basis for four popular films. She returned to the world of Panem with The Ballad of Songbirds and Snakes. Year of the Jungle, her picture book based on the year her father was deployed in Vietnam, was published in 2013 to great critical acclaim. To date, her books have been published in fifty-three languages around the world.

Praise for The Hunger Games"A violent, jarring, speed-rap of a novel that generates nearly constant suspense. . . . I couldn't stop reading." --Stephen King, Entertainment Weekly"I was so obsessed with this book. . . . The Hunger Games is amazing."--Stephenie Meyer, author of the Twilight saga"Brilliantly plotted and perfectly paced."--John Green, The New York Times Book Review

Praise for The Hunger Games"A violent, jarring, speed-rap of a novel that generates nearly constant suspense. . . . I couldn't stop reading." --Stephen King, Entertainment Weekly"I was so obsessed with this book. . . . The Hunger Games is amazing."--Stephenie Meyer, author of the Twilight saga"Brilliantly plotted and perfectly paced."--John Green, The New York Times Book Review

All events will be held virtually until further notice.
END_OF_DOCUMENT_TOKEN_TO_BE_REPLACED