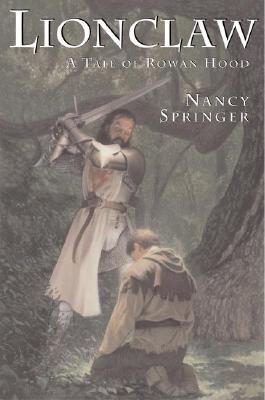 By Nancy Springer
Email or call for price.
Out of Print

Lionel is seven feet of pure coward. Banished by his warrior father for refusing to learn to fight, Lionel found refuge in the woods of Sherwood Forest, where he joined the misfit band of teens led by Rowan Hood, daughter of Robin. Now, a year later, his father has been taken prisoner by Robin Hood, and Lionel is determined to make peace. But when Lionclaw spots his son among outlaws, he vows revenge. Suddenly Sherwood is crawling with danger and Lionel wants nothing more than to turn and run. But when a couple of bounty hunters capture Rowan and use her as bait, the lion in Lionel is awakened, along with the courage to stand up to his father.

Nancy Springer has published forty novels for adults, young adults and children. In a career beginning shortly after she graduated from Gettysburg College in 1970, Springer wrote for ten years in the imaginary realms of mythological fantasy, then ventured on contemporary fantasy, magical realism, and women's fiction before turning her attention to children's literature. Her novels and stories for middle-grade and young adults range from contemporary realism, mystery/crime, and fantasy to her critically acclaimed novels based on the Arthurian mythos, I AM MORDRED: A TALE OF CAMELOT and I AM MORGAN LE FAY. Springer's children's books have won her two Edgar Allan Poe awards, a Carolyn W. Field award, various Children's Choice honors and numerous ALA Best Book listings. Her most recent series include the Tales of Rowan Hood, featuring Robin Hood's daughter, and the Enola Holmes mysteries, starring the much younger sister of Sherlock Holmes. Ms. Springer lives in East Berlin, Pennsylvania.

All events will be held virtually until further notice.
END_OF_DOCUMENT_TOKEN_TO_BE_REPLACED