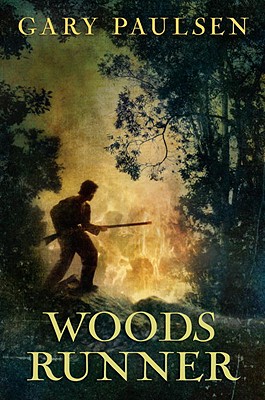 By Gary Paulsen
Email or call for price.
Hard to Find

Samuel, 13, spends his days in the forest, hunting for food for his family. He has grown up on the frontier of a British colony, America. Far from any town, or news of the war against the King that American patriots have begun near Boston.

But the war comes to them. British soldiers and Iroquois attack. Samuel’s parents are taken away, prisoners. Samuel follows, hiding, moving silently, determined to find a way to rescue them. Each day he confronts the enemy, and the tragedy and horror of this war. But he also discovers allies, men and women working secretly for the patriot cause. And he learns that he must go deep into enemy territory to find his parents: all the way to the British headquarters, New York City.

Gary Paulsen is the distinguished author of many critically acclaimed books for young people. His most recent books are "Lawn Boy, The Amazing Life of Birds, "and "Mudshark."

Starred review, Kirkus Reviews, January 1, 2010: "A superb reflection on the nature of war."

All events will be held virtually until further notice.
END_OF_DOCUMENT_TOKEN_TO_BE_REPLACED