Standing Against the Wind (Hardcover) 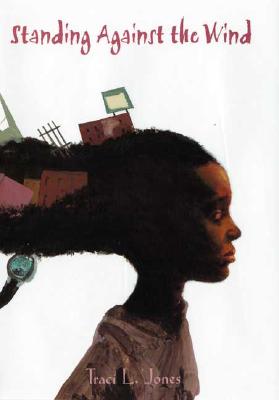 Patrice Williams was happy living in Georgia with her grandmother, who called her “cocoa grandbaby.” Then her mother lured her to Chicago and ended up in jail. Now Patrice lives with her Auntie Mae, and her new nickname is “Puffy” – thanks to her giant poof of hair. But Patrice’s hair isn’t the only reason she sticks out: she cares about her grades and strives for the best. That’s why Monty Freeman, another eighth grader who lives in the building, asks Patrice to tutor his little brother. Even though Monty’s friends make Patrice uneasy, Monty himself is friendly, confident, and surprisingly smart. When he becomes her guardian angel, Patrice begins to think something stronger than friendship might be growing between them. Still, nothing will stop her from applying for a scholarship at prestigious Dogwood Academy – her ticket out of the project and a school populated by gangs and drug runners.

In her debut novel, Traci L. Jones presents a girl with grit she never knew she had, and a boy so inspired by her that he begins to take pride in his own abilities. Standing Against the Wind is a 2007 Bank Street - Best Children's Book of the Year and the winner of the 2007 Coretta Scott King - John Steptoe New Talent Award.

TRACI L. JONES lives with her husband and children in Denver, Colorado.

"The gripping story of a contemporary kid who wants to make her dreams come true."  --Booklist "Patrice is a true hero, a child who has the inner strength to overcome roadblocks to success.  Moving and thought-provoking."  --Kirkus Reviews "Stories of hope, loyalty, and success such as this one are valuable."   --School Library Journal "Patrice and Monty emerge as likable kids; readers can plug into their story at multiple levels."  --The Bulletin of the Center for Children's Books "This excellent first novel is quite memorable, and readers will be drawn into Patrice's quiet but determined quest for a more promising future. A  highly recommended purchase for libraries serving middle and high school students."  --VOYA

All events will be held virtually until further notice.
END_OF_DOCUMENT_TOKEN_TO_BE_REPLACED