A True and Faithful Narrative (Paperback) 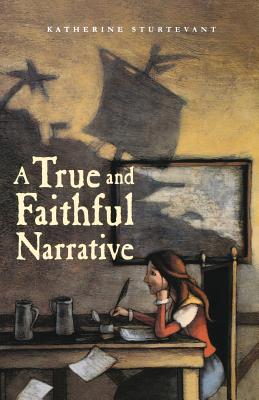 In Restoration London, sixteen-year-old Meg Moore is
something of an anomaly. Unlike other girls her age, Meg pores
over books. She spends long hours conversing with the famous
authors and poets who visit her father's bookstore, and even
writes her own stories, laboring over every word until her hand
is black with ink. Without warning, however, Meg comes to
learn exactly how powerful words can be. The day her best
friend's brother Edward sets sail for Italy, Meg scoffs at his
attempts at romance by answering him with a thoughtless jest.
Soon news travels to London that Edward's ship has been
captured and he has been sold as a slave in North Africa – and
Meg cannot shake the thought that her cruel words are the
cause. Now Meg must use her fiery language to bring Edward
home, imploring her fellow Londoners to give all that they can
to buy Edward's freedom. But once Meg learns to direct the
power behind her words, will she be able to undo the damage
she has caused, and write freely the stories that she longs to put
to paper?

This inspired sequel to At the Sign of the Star continues Meg's
story with elegance and élan.

I grew up in California’s Santa Clara Valley. When we moved there I was five years old, and the valley was filled with fruit orchards. The house I lived in was a big, eccentric place, built in part by my father and his friends. It had a huge brick fireplace, a screened-in porch where we ate and sometimes slept in summer, a "secret" recess in one of the bedrooms where Easter nests were always hidden, and dozens of built-in bookshelves. The house sat on three acres of land dotted with fruit trees and outbuildings. I had a dozen favorite places to lie reading.
I come from a book-loving family. My grandmother worked at the Library of Congress during the 1940s and later owned an antiquarian bookshop. My mother was a school librarian for many years and always brought home wonderfully written stories, many of them set in other eras.
I was a writer from an early age. I wrote stories, poems, and plays; I wrote them for school and I wrote them on summer vacation. My grandmother gave me a portable typewriter for Christmas when I was twelve. After that, it traveled with me on every camping trip we took. I would sit at a picnic table, under evergreens, and turn our humdrum vacations into tales of heroic rescues or martyred pets.
By the time I was in high school, the fruit orchards in the valley had given way to housing tracts and electronics plants. One night, when I was sixteen years old, our big funny house burned to the ground. A few days later we walked through the rubble to see what could be salvaged. Little remained: the remnants of the stove, the piano keys, and hundreds and hundreds of scorched books strewn among the ashes.
So the place I grew up in is now gone. Of course, so are many of my favorite places, including colonial Boston, biblical Palestine, and Restoration London. But the books I read when I was growing up are still with me, and will be with me forever. KATHERINE STURTEVANT studied creative writing at San Francisco State University, where she received her B.A. in 1976 and her M.A. in 1993. Her articles and reviews have been published in The San Francisco Chronicle, The San Jose Mercury-News, The Willamette Week, and Calyx. She lives in Berkeley with her husband, her twin sons, and two Maine Coon cats.

All events will be held virtually until further notice.
END_OF_DOCUMENT_TOKEN_TO_BE_REPLACED