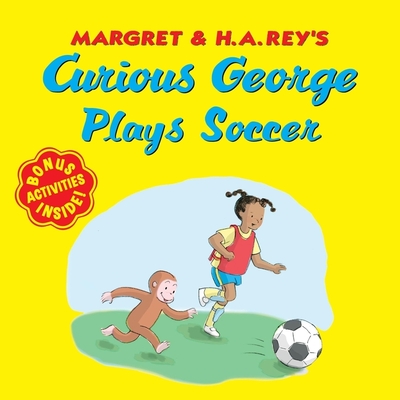 When George sees his friend Gracie playing soccer in the park, he’s eager to join in—so eager that he grabs the ball with his hands and throws it in the net! Lucky for George, there’s a soccer camp starting at the rec center where he can learn the basic rules of the game and all about dribbling, passing, and what it means to be a team player. George has fun—and gets into a little mischief—at camp, but it’s not until the final game that he finds the perfect position for himself. When he does, he proves to his teammates, coach, and himself that he’s their MVM—Most Valuable Monkey!

H. A. Rey (1898–1977) was born in Hamburg, Germany, near the world-famous Hagenbeck Zoo, and developed a lifelong love for animals and drawing. He and his wife, Margret (1906–1996), who studied art at the acclaimed Bauhaus school, had many pets—including two marmoset monkeys that joined them on one of their steamship journeys across the Atlantic. Hans and Margret’s world-famous curious monkey first appeared in a manuscript strapped to their bicycles as they fled wartime Paris for the safety of the United States. Committed philanthropists in their own lives, a portion of proceeds from each Curious George book sold flows to the Curious George Foundation, which funds programs for children that encourage inquisitiveness in learning and exploring. Curious George has been successfully adapted into a major motion picture and an Emmy-winning television show on PBS.www.curiousgeorge.com.

All events will be held virtually until further notice.
END_OF_DOCUMENT_TOKEN_TO_BE_REPLACED