The Love Curse of the Rumbaughs (Paperback) 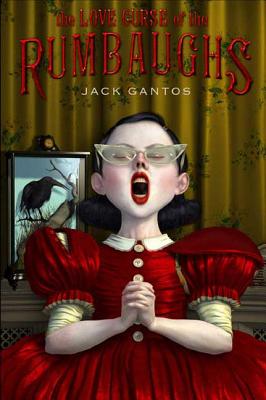 On an unseasonably warm Easter Sunday, a young girl named Ivy discovers a chilling secret in the basement of the Rumbaugh pharmacy across the street from the hotel where she lives with her mother. The discovery reveals a disturbing side to the eccentric lives of family friends Abner and Adolph Rumbaugh, known throughout their small western Pennsylvania town simply as the Twins. It seems that Ab and Dolph have been compelled by a powerful mutual love for their deceased mother to do something outrageous, something that in its own twisted way bridges the gap between the living and the dead. Immediately, Ivy's discovery provokes the revelation of a Rumbaugh family curse, a curse that, as Ivy will learn over the coming years, holds a strange power over herself and her own mother.

Jack Gantos has written books for people of all ages, from picture books and middle-grade fiction to novels for young adults and adults. His works include Hole in My Life, a memoir that won the Michael L. Printz and Robert F. Sibert Honors, Joey Pigza Swallowed the Key, a National Book Award Finalist, and Joey Pigza Loses Control, a Newbery Honor book. Jack was born in Mount Pleasant, Pennsylvania, and when he was seven, his family moved to Barbados. He attended British schools, where there was much emphasis on reading and writing, and teachers made learning a lot of fun. When the family moved to south Florida, he found his new classmates uninterested in their studies, and his teachers spent most of their time disciplining students. Jack retreated to an abandoned bookmobile (three flat tires and empty of books) parked out behind the sandy ball field, and read for most of the day. The seeds for Jack’s writing career were planted in sixth grade, when he read his sister’s diary and decided he could write better than she could. He begged his mother for a diary and began to collect anecdotes he overheard at school, mostly from standing outside the teachers’ lounge and listening to their lunchtime conversations. Later, he incorporated many of these anecdotes into stories.  While in college, he and an illustrator friend, Nicole Rubel, began working on picture books. After a series of well-deserved rejections, they published their first book, Rotten Ralph, in 1976. It was a success and the beginning of Jack’s career as a professional writer. Jack continued to write children’s books and began to teach courses in children’s book writing and children’s literature. He developed the master’s degree program in children’s book writing at Emerson College and the Vermont College M.F.A. program for children’s book writers. He now devotes his time to writing books and educational speaking. He lives with his family in Boston, Massachusetts.

“This offbeat novel, reflecting elements of Psycho and Faulkner's A Rose for Emily, draws readers into a macabre world where taboos are lifted and unconventional desires unleashed.” —Publishers Weekly

“Eerie. This thought-provoking story about free will and the arguments of nature and nurture will definitely stick with readers.” —School Library Journal

“Few other books offer such a combination of stylization verging on the comic and a true fascination with the Gothic's exploration of human minds.” —Chicago Tribune

“The wonderful and compelling strangeness will . . . draw many readers, especially fans of silver-screen or classic literary Gothic.” —The Bulletin of the Center for Children's Books

“You know where The Love Curse of the Rumbaughs by Jack Gantos is heading, even as you can't quite believe it. . . . Possibly the most oddball children's book ever written and certainly one of the cleverest.” —The Telegraph (UK)

All events will be held virtually until further notice.
END_OF_DOCUMENT_TOKEN_TO_BE_REPLACED