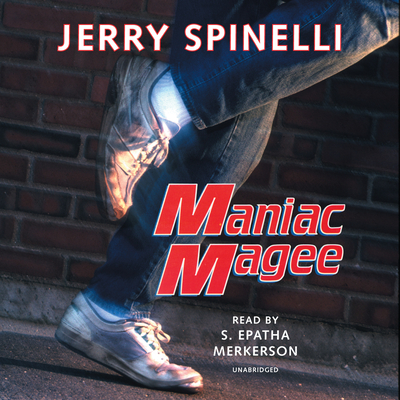 By Jerry Spinelli, S. Epatha Merkerson (Read by)
Email or call for price.
Not in stock

He wasn’t born with the name Maniac Magee. He came into this world named Jeffrey Lionel Magee, but when his parents died and his life changed, so did his name. And Maniac Magee became a legend. Even today kids talk about how fast he could run; about how he hit an inside-the-park “frog” homer; how no knot, no matter how snarled, would stay that way once he began to untie it. But the thing Maniac Magee is best known for is what he did for the kids from the East Side and those from the West Side.

Jerry Spinelli won the Newbery Medal in 1991 for Maniac Magee, the sixth of his more than 15 acclaimed books for young readers. Jerry is known for his entertaining and funny books for children and young adults. He grew up in Norristown, PA. At one time, he dreamed of becoming a major league baseball player. All of this changed when his poem about a football game was published at age 16 in the local newspaper. From then on, he wanted to become a writer. After college, Jerry became an editor for a magazine about engineering. For many years, during his lunch hour, he wrote books for adults. None of them were published. Jerry's first book for children was published when he was 41 years old.

He now lives in Phoenixville, PA with his wife, Eileen Spinelli, who is also an author of children's books. They have six children -- five from Eileen before they married, and one of their own.

All events will be held virtually until further notice.
END_OF_DOCUMENT_TOKEN_TO_BE_REPLACED