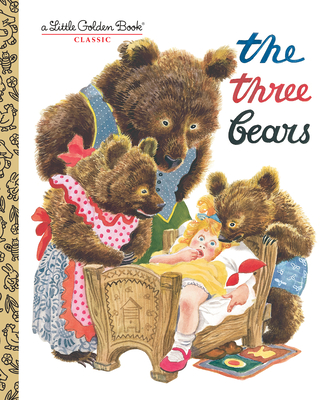 By Golden Books, Feodor Rojankovsky (Illustrator)
$4.99
On Our Shelves Now

This classic Little Golden Book edition of the famous folk tale has had many imitators, but none can measure up to the way illustrator Feodor Rojankovsky brought Goldilocks and the three bears to life. Originally published in 1948, The Three Bears is now back in print for a new generation of fans.

Born in Russia, FEODOR ROJANKOVSKY (1891-1970) immigrated to the United States in 1941. He immediately began working on books for his friend Georges Duplaix's company, Artists and Writers Guild, which had just begun to produce a new line of titles called Little Golden Books. Rojankovsky went on to become one of the most prolific illustrators of Golden Books. In 1956, he was awarded the Caldecott Medal for Frog Went A-Courtin'.

All events will be held virtually until further notice.
END_OF_DOCUMENT_TOKEN_TO_BE_REPLACED