Newcomers: Gentrification and Its Discontents (Hardcover) 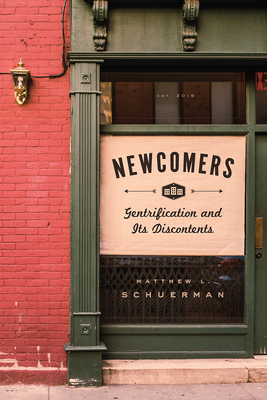 Gentrification is transforming cities, small and large, across the country. Though it’s easy to bemoan the diminished social diversity and transformation of commercial strips that often signify a gentrifying neighborhood, determining who actually benefits and who suffers from this nebulous process can be much harder. The full story of gentrification is rooted in large-scale social and economic forces as well as in extremely local specifics—in short, it’s far more complicated than both its supporters and detractors allow.

In Newcomers, journalist Matthew L. Schuerman explains how a phenomenon that began with good intentions has turned into one of the most vexing social problems of our time. He builds a national story using focused histories of northwest Brooklyn, San Francisco’s Mission District, and the onetime site of Chicago’s Cabrini-Green housing project, revealing both the commonalities among all three and the place-specific drivers of change. Schuerman argues that gentrification has become a too-easy flashpoint for all kinds of quasi-populist rage and pro-growth boosterism. In Newcomers, he doesn’t condemn gentrifiers as a whole, but rather articulates what it is they actually do, showing not only how community development can turn foul, but also instances when a “better” neighborhood truly results from changes that are good. Schuerman draws no easy conclusions, using his keen reportorial eye to create sharp, but fair, portraits of the people caught up in gentrification, the people who cause it, and its effects on the lives of everyone who calls a city home.

Matthew L. Schuerman is senior editor at WNYC and has written for the New York Observer, Fortune, and Village Voice.

“Newcomers approaches a thorny and politically charged topic with nuance, resulting in an insightful, thorough portrait of seventy years of gentrification.”
— Foreword Reviews

“Schuerman combines measured academic research with informal reportage. The effect is thorough, yet intimate. He doesn’t offer a fix for gentrification, and he doesn’t always view it as detrimental. . . . What emerges from the book, then, is the repeated failure of policymakers to address the potential fall-out of gentrification before it’s too late.”
— Times Literary Supplement

“Solid sociology in pursuit of an issue that continues to confound. . . Schuerman unpacks the loaded word "gentrification," allowing readers to understand it as a complex phenomenon in urban neighborhoods—never entirely negative or entirely positive and usually a mixture that improves the lots of some residents while hurting others.”
— Kirkus Reviews

“Finally, a thoughtful and nuanced book about gentrification, a rare feat that Schuerman accomplishes through old-fashioned shoe leather reporting. Newcomers is provocative and important, with the potential to reshape how we think about a polarizing topic essential to anyone who cares about our cities.”
— Gary Rivlin, author of Katrina: After the Flood

“Newcomers is a sophisticated and original account of gentrification. It casts new light on familiar places, from Brooklyn to Chicago and San Francisco, and tells deeply human stories of neighborhood change. Schuerman’s analysis is refreshingly free of nostalgia or ideology; his reporting is careful and sharp. No matter what you think about class conflict in the city, this book will challenge and captivate you.”
— Eric Klinenberg, author of Palaces for the People

“Newcomers is a revelation and one of the very best books on cities and urbanism I’ve read in some time. Schuerman parses the pros and cons of gentrification with facts and level-headed analysis. Required reading for mayors, housing experts and advocates, neighborhood activists, developers, and urbanites of all stripes.”
— Richard Florida, author of The New Urban Crisis

“Gentrification has found its perfect biographer. Newcomers is a beautiful, gripping page-turner, reminding us that gentrification has been a central element of American urbanism for at least half a century—and one that continues to drive policy debates and culture wars.”
— Elvin Wyly, University of British Columbia

"...Matthew L. Schuerman surveys sixty years of pretension and displacement in the urban United States. Through case studies of Brownstone Brooklyn, Chicago’s Near North Side and San Francisco’s Mission District, he argues for gentrification as a symptom of the demise of manufacturing and emergence of the information-based economy. These wider socio-political analyses are grounded at every turn by personal stories of residents and developers, politicians and communities, told with a reporter’s knack for narrative."
— Tank Magazine

"A complex even-handed analysis of what has happened to our cities. . . very readable."
— Times Higher Education

"Well written and engaging...[Newcomers is] a readable 'big picture' introduction to the numerous issues of U.S. gentrification."
— Journal of Urban Affairs

All events will be held virtually until further notice.
END_OF_DOCUMENT_TOKEN_TO_BE_REPLACED