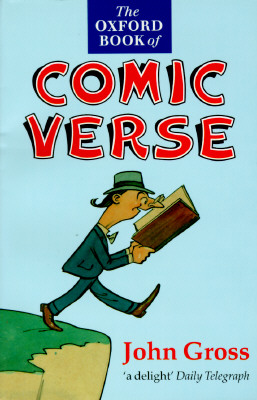 Comic verse, writes editor John Gross, is verse that is designed to amuse--and perhaps that is as far as any attempt at a definition ought to go. In The Oxford Book of Comic Verse, Gross has combed the annals of literature in English from the middle ages to the present, gathering poems
that provoke laughter, smiles, and even reflections on the human condition--but always poems that amuse.
From limericks to social satire, The Oxford Book of Comic Verse offers a remarkable collection of outstanding light poetry. Gross has brought together the finest writers in the history of the English language--from Chaucer and Skelton to Shakespeare and Swift, Lord Byron to Robert Browning,
Emily Dickinson to John Updike--offering delightful examples of their comic verse. Many of these lines dance with whimsy, such as John Skelton's Colin Clout (For though my rhyme be ragged, / Tattered and jagged, / Rudely rain-beaten, / Rusty and moth-eaten, / If ye take well therewith, / It hath in it
some pith); others float heavier thoughts on light rhymes--as in Matthew Prior's succinct Human Life (What trifling coil do we poor mortals keep;/ Wake, eat, and drink, evacuate and sleep.). The range of writers who have composed comic verse is astonishing, as is the delight of the poems
themselves. Here we read T.S. Eliot mocking himself (How unpleasant to meet Mr. Eliot / With his features of clerical cut); poet and Soviet historian Robert Conquest, mingling his two professions in a limerick (There was a great Marxist called Lenin/ Who did two or three million men in/ --That's
a lot to have done in/ --But where he did one in/ That grand Marxist Stalin did ten in); and Wendy Cope commenting on her disillusionment with poets (I used to think all poets were Byronic./ They're mostly wicked as ginless tonic/ And wild as pension plans). And along the way, we are treated to
witty song lyrics as well, from First World War soldiers' tunes, to Irving Berlin, to Cole Porter, to Lorenz Hart (When love congeals/It soon reveals/ the faint aroma of performing seals/The double-crossing of a pair of heels/I wish I were in love again ).
Whether it comes from anonymous popular culture or the icons of the literary canon, comic verse has been a source of pleasure and diversion through the ages--a combination of wit, verbal artistry, and even serious contemplation. This collection, compiled by one of our finest critics and
anthologists, brings this tradition into the hands of today's readers, offering hours of de.

About the Editor: John Gross is the theater critic for the London Sunday Times. A former book critic for The New York Times, he is the author and editor of many books, including The Oxford Book of Essays.

All events will be held virtually until further notice.
END_OF_DOCUMENT_TOKEN_TO_BE_REPLACED