Davos Man: How the Billionaires Devoured the World (Hardcover) 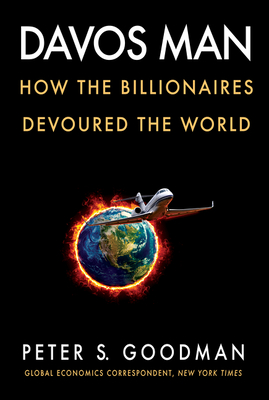 “Davos Man will be read a hundred years from now as a warning.” —Evan Osnos

“Excellent. A powerful, fiery book, and it could well be an essential one.”  —NPR.org

The history of the last half century in America, Europe, and other major economies is in large part the story of wealth flowing upward. The most affluent people emerged from capitalism’s triumph in the Cold War to loot the peace, depriving governments of the resources needed to serve their people, and leaving them tragically unprepared for the worst pandemic in a century.

Drawing on decades of experience covering the global economy, award-winning journalist Peter S. Goodman profiles five representative “Davos Men”—members of the billionaire class—chronicling how their shocking exploitation of the global pandemic has hastened a fifty-year trend of wealth centralization. Alongside this reporting, Goodman delivers textured portraits of those caught in Davos Man’s wake, including a former steelworker in the American Midwest, a Bangladeshi migrant in Qatar, a Seattle doctor on the front lines of the fight against COVID, blue-collar workers in the tenements of Buenos Aires, an African immigrant in Sweden, a textile manufacturer in Italy, an Amazon warehouse employee in New York City, and more.

Goodman’s revelatory exposé of the global billionaire class reveals their hidden impact on nearly every aspect of modern society: widening wealth inequality, the rise of anti-democratic nationalism, the shrinking opportunity to earn a livable wage, the vulnerabilities of our health-care systems, access to affordable housing, unequal taxation, and even the quality of the shirt on your back. Meticulously reported yet compulsively readable, Davos Man is an essential read for anyone concerned about economic justice, the capacity of societies to grapple with their greatest challenges, and the sanctity of representative government.

Peter S. Goodman is the Global Economics Correspondent for the New York Times, based in London. He was previously the NYT’s national economics correspondent, based in New York, where he played a leading role in the paper’s award-winning coverage of the Great Recession, including a series that was a Pulitzer finalist. Previously, he covered the Internet bubble and bust as the Washington Post’s telecommunications reporter, and served as WashPo’s China-based Asian economics correspondent. He is the author of Past Due: The End of Easy Money and the Renewal of the American Economy. He graduated from Reed College and completed a master’s in Vietnamese history from the University of California, Berkeley.

“A meticulously researched, clearly reported and truly infuriating history of the way the top 1% of the world has systematically arranged the way societies operate in order to become even richer, all to the detriment of the rest of us. … The book serves as a call to arms and an invitation to fight back against the continued unabashed pillaging of all economies by those who least need it.”  — San Francisco Chronicle

“Powerful. … Goodman’s reporting is biting and bitterly funny. … Davos Man shows us that today’s extreme wealth is inextricably linked to a great crime, perhaps the greatest one of this century: the hijacking of our democracy.” — Washington Post

“Excellent. ... An angry, powerful look at the economic inequality that's been brought into sharp relief by the COVID-19 pandemic. … A powerful, fiery book, and it could well be an essential one.” — NPR.org

"The Times’s global economics correspondent profiles five billionaires (along with workers and migrants across the world) to show how their exploitation of the pandemic has exacerbated inequality across the globe." — New York Times Book Review

“Well-written and well-reported. … A passionate denunciation of the mega-rich.” — The Economist

"A biting, uproarious yet vital and deadly serious account of the profound damage the billionaire class is inflicting on the world. Peter S. Goodman guides the reader through the hidden stories and twisted beliefs of some of the titans of finance and industry, who continually rationalize their bad behavior to themselves." — JOSEPH E. STIGLITZ, recipient of the Nobel Prize in Economics

"Unflinching and authoritative, Peter Goodman’s Davos Man will be read a hundred years from now as a warning, bellowed from the blessed side of the velvet rope, about a slow-motion scandal that spans the globe. Deliciously rich with searing detail, the clarity is reminiscent of Tom Wolfe, let loose in the Alps, in search of hypocrisies and vanities." — EVAN OSNOS, National Book Award-winning author of Age of Ambition and Wildland

“One of the great financial investigative journalists, Peter S. Goodman delivers a meticulously detailed account of how the billionaire class has hijacked the world’s economy, feasting on calamity, shirking taxes, all the while spouting bromides about compassionate capitalism. I so wish this tale of limitless greed and hypocrisy was a novel or a mini-series and not the truth about the world in which we live. Reader, prepare to be enraged.” — BARBARA DEMICK, author of Nothing to Envy and Eat the Buddha

“New York Times global economics correspondent Goodman mounts a scathing critique of the greed, narcissism, and hypocrisy that characterize those in ‘the stratosphere of the globe-trotting class’… An urgent, timely, and compelling message with nearly limitless implications.” — Kirkus Reviews (starred review)

“Impressively detailed. … Very readable, extensively reported. … A well-researched and lively explanation of how the global economy works, and the turning points that have enabled profiteering by the ultra-rich while undermining societal and democratic institutions.” — Charter

“Goodman is a skilled reporter whose stories of private affluence and public squalor are filled with detail and human interest.” — Wall Street Journal

Events may be virtual or in person. Please see details for each event.
END_OF_DOCUMENT_TOKEN_TO_BE_REPLACED