The Wailing Wind: A Leaphorn and Chee Novel (Paperback) 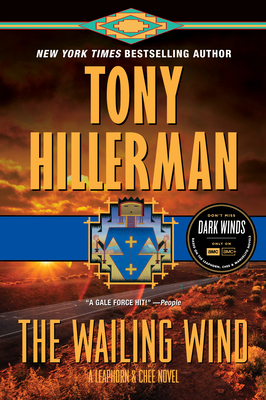 This is book number 15 in the A Leaphorn and Chee Novel series.

“Tony Hillerman’s novels are like no others. His insightful portrayal of the vast Navajo Reservation, the spirit-haunted people who inhabit it and the clash between ancient traditions and modern civilization that has shaped its present and will determine its future has produced a body of work unique in mystery fiction.”—

Officer Bernadette Manuelito finds the dead man slumped over in the cab of a pickup, with a rich ex-con's phone number in his pocket . . . and a tobacco tin filled with placer gold. She figures he’s just another drunk—an assumption that gets her in trouble for mishandling a crime scene and brings down the wrath of the FBI on her supervisor, Sergeant Jim Chee of the Navajo Tribal Police.

For Chee’s mentor, former Lieutenant Joe Leaphorn, the death eerily echoes a long dormant cold case. Years earlier, Leaphorn followed the trail of a beautiful, young, and missing wife to a dead end, and the failure to close that investigation has haunted him ever since. This new case could lead to the truth, and the legendary lawman comes out of retirement, determined to solve it.

But ghosts never sleep in these high, lonely Southwestern hills. For Bernie, Leaphorn, and Chee, the twisted threads of craven murders past and current may finally be coming together, as the desert gives up its secrets . . . secrets heard in the wailing wind.

Events may be virtual or in person. Please see details for each event.
END_OF_DOCUMENT_TOKEN_TO_BE_REPLACED