Disunited Nations: The Scramble for Power in an Ungoverned World (Hardcover) 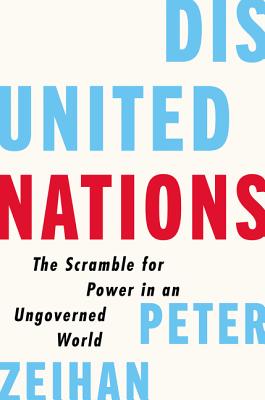 Most countries and companies are not prepared for the world Peter Zeihan says we’re already living in. For decades, America’s allies have depended on its might for their economic and physical security. But as a new age of American isolationism dawns, the results will surprise everyone. In Disunited Nations, geopolitical strategist Peter Zeihan presents a series of counterintuitive arguments about the future of a world where trade agreements are coming apart and international institutions are losing their power.

Germany will decline as the most powerful country in Europe, with France taking its place. Every country should prepare for the collapse of China, not North Korea. We are already seeing, as Zeihan predicts, a shift in outlook on the Middle East: It is no longer Iran that is the region’s most dangerous threat, but Saudi Arabia. The world has gotten so accustomed to the “normal” of an American-dominated order that we have all forgotten the historical norm: several smaller, competing powers and economic systems throughout Europe and Asia.

America isn’t the only nation stepping back from the international system. From Brazil to Great Britain to Russia, leaders are deciding that even if plenty of countries lose in the growing disunited chaos, their nations will benefit. The world isn’t falling apart—it’s being pushed apart. The countries and businesses prepared for this new every-country-for-itself ethic are those that will prevail; those shackled to the status quo will find themselves lost in the new world disorder.

Smart, interesting, and essential reading, Disunited Nations is a sure-to-be-controversial guidebook that analyzes the emerging shifts and resulting problems that will arise in the next two decades. We are entering a period of chaos, and no political or corporate leader can ignore Zeihan’s insights or his message if they want to survive and thrive in this uncertain new time.

Peter Zeihan is a geopolitical strategist and the founder of the consulting firm Zeihan on Geopolitics. His clients include energy corporations, financial institutions, business associations, agricultural interests, universities, and the U.S. military. He is the author of The Accidental Superpower and The Absent Superpower. He lives in Colorado.

“Zeihan integrates a wealth of information and data into lucid analyses written in accessible, boisterous prose… The result is a stimulating look into the geopolitical crystal ball.” — Publishers Weekly

“Peter Zeihan has written a smart, well-crafted page-turner that lays out the compelling reasons why America’s role in the world has changed--and why that’s good news for Americans and sobering for everyone else. His vivid account of the impact of America’s good fortune for the rest of the world makes this an original and invaluable read.”  — Ian Bremmer, Eurasia Group, on The Absent Superpower

“If President Trump has but one book to read as he assumes command, it should be this one.” — Honorable Dave McCurdy, former Member of U.S. House of Representatives; President and CEO of the American Gas Association, on The Absent Superpower

“The Absent Superpower is a must-read to understand the forces that will shapegeopolitics and potentially ignite decades of global disorder. By dissectingthe technological and geographic realities of energy and demography, Zeihan forecasts theconflicts and economic realignments that will follow America’s withdrawal fromactive global leadership.” — Mitt Romney on The Absent Superpower

“Many believe that the American economy has some inherent advantages over its major competitors—a more flexible structure, stronger entrepreneurial traditions and a more demographically vibrant society. Along comes a fascinating new book that says you ain’t seen nothing yet.” — Fareed Zakaria, CNN, on The Accidental Superpower

Events may be virtual or in person. Please see details for each event.
END_OF_DOCUMENT_TOKEN_TO_BE_REPLACED