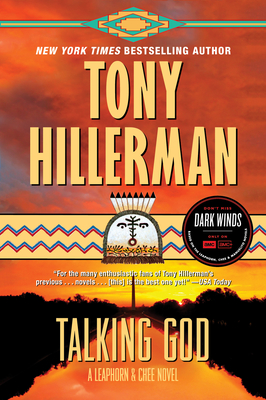 This is book number 9 in the A Leaphorn and Chee Novel series.

“For the many enthusiastic fans of Tony Hillerman’s previous mystery novels . . . only one thing needs to be said: Talking God is the best one yet!” — USA Today

Reunited by a grave robber and a corpse, Navajo Tribal Police Lieutenant Joe Leaphorn is trying to determine the identity of a murder victim, while Officer Jim Chee is arresting Smithsonian conservator Henry Highhawk for ransacking the sacred bones of his ancestors.

But with each peeled-back layer, it becomes shockingly clear that these two cases are mysteriously connected—and that others are pursuing Highhawk, with lethal intentions. And the search for answers to a deadly puzzle is pulling Leaphorn and Chee into the perilous arena of superstition, ancient ceremony, and living gods.

“Woven as tightly as a Navajo blanket.” — Newsweek

“For the many enthusiastic fans of Tony Hillerman’s previous mystery novels, including A Thief of Time, only one thing needs to be said: Talking God is the best one yet!” — USA Today

Events may be virtual or in person. Please see details for each event.
END_OF_DOCUMENT_TOKEN_TO_BE_REPLACED