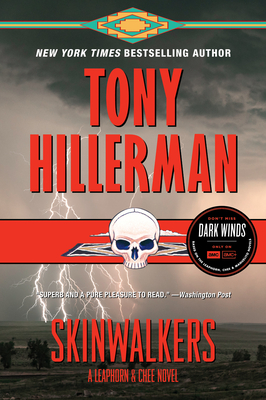 This is book number 7 in the A Leaphorn and Chee Novel series.

Three shotgun blasts rip through the side of Officer Jim Chee’s trailer as the Navajo Tribal Policeman sleeps. He survives, but the inexplicable attack has raised disturbing questions about a lawman once beyond reproach.

Lieutenant Joe Leaphorn wonders why Chee was a target and what connection the assault has to a series of gruesome murders that has been plaguing the reservation. But the investigation is leading them both into a nightmare of ritual, witchcraft, and blood . . . and into the dark and mystical domain of evil beings of Navajo legend, the “skinwalkers.”

“Hillerman is unique, and Skinwalkers is one of his best works yet.” — Los Angeles Times

All events will be held virtually until further notice.
END_OF_DOCUMENT_TOKEN_TO_BE_REPLACED