Not So Pure and Simple (Paperback) 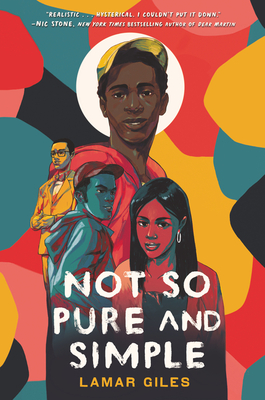 “What The Hate U Give did for opening up a conversation with teens about police brutality and racial profiling, Not So Pure and Simple does for toxic masculinity. This story is hilarious, honest, and more necessary than I know how to put into words. Giles is able to paint the normalcy of toxic masculinity in all its minute idiosyncrasies without it feeling like a beat-you-over-the-head-I’m-trying-to-teach-you-something story. He shows the layers to a problem that’s been built by generations of men just passing on the habits, expectations, and advice of the men before them. And he does so through the beautifully flawed—although he doesn’t know he’s flawed—Del. Everyone needs to read this book.”
— Claire Phelan, Third Place Books, Lake Forest Park, WA

"Hysterical. I couldn’t put it down.” (Nic Stone) "I laughed, I gasped, I church grunted through every chapter." (Tiffany D. Jackson) "Heartfelt and hilarious on every page!" (Justin A. Reynolds)

4 starred reviews! * An Indie Next List Pick! * Named one of Bank Street College of Education's Best Children’s Books of the Year!

Two-time Edgar Award finalist Lamar Giles spotlights the consequences of societal pressure, confronts toxic masculinity, and explores the complexity of what it means to be a “real man.”

Del has had a crush on Kiera Westing since kindergarten. And now, during their junior year, she’s finally available. So when Kiera volunteers for an opportunity at their church, Del’s right behind her. Though he quickly realizes he’s inadvertently signed up for a Purity Pledge.

His dad thinks his wires are crossed, and his best friend, Qwan, doesn’t believe any girl is worth the long game. But Del’s not about to lose his dream girl, and that’s where fellow pledger Jameer comes in. He can put in the good word. In exchange, Del just has to get answers to the Pledgers’ questions…about sex ed.

With other boys circling Kiera like sharks, Del needs to make his move fast. But as he plots and plans, he neglects to ask the most important question: What does Kiera want? He can’t think about that too much, though, because once he gets the girl, it’ll all sort itself out. Right?

"With true-to-life characters and a straightforward handling of sex, including often ignored aspects of male sexuality, Giles’s thoughtful, hilarious read offers a timely viewpoint on religion, toxic masculinity, and teen sexuality." (Publishers Weekly, "An Anti-Racist Children's and YA Reading List")

Lamar Giles writes for teens and adults. He is the author of the Edgar Award finalists Fake ID and Endangered as well as the critically acclaimed Overturned, Spin, and The Last Last-Day-of-Summer. He is a founding member of We Need Diverse Books and resides in Virginia. Visit him online at www.lamargiles.com.

“The novel takes on teen attitudes toward sex and relationships and gender power dynamics in a way that is appealing and thought provoking. Hilariously necessary.” — Kirkus Reviews (starred review)

"With a fresh perspective, Giles takes care to flesh out his full cast of characters, creating an intricate, multifaceted web of misogyny and its detrimental impact." — Booklist (starred review)

“This is a deeply funny and searingly honest look at teen sex, adults’ anxieties around it, and the toxic masculinity that so often shapes it.”  — Bulletin of the Center for Children’s Books

“Holy hell! This was perfect timely read! I laughed, I gasped, I church grunted through every chapter. Giles is a master at writing realistic characters that are both flawed and relatable.” — Tiffany D. Jackson

"Heartfelt and hilarious on every page! Giles is not only adept at storytelling, he understands what makes us human.” — Justin A. Reynolds

“Lamar Giles continues to prove he’s untouchable when crafting unforgettable characters. Readers will laugh hysterically but will lean in to the novel when Giles takes an honest look into masculinity and flips the ol’ premise of “boy gets girl.” — Lilliam Rivera, author of Dealing in Dreams and The Education of Margot Sanchez

“Not So Pure and Simple manages to put real issues in the spotlight, like toxic masculinity and societal pressures on youth while still being a funny, heartfelt, and wildly charming read! Get ready to hug this book as you’ll be cheering for Del along the way!” — Jay Coles, author of Tyler Johnson Was Here

“Lamar Giles’s writing is smart, funny, and lit. And he does it while taking on toxic masculinity. Not since Chris Lynch’s Inexcusable have I read a more thought-provoking, pull-no-punches take on what our ‘nice’ boys learn from us as a society. This book is excellent.” — Tracey Baptiste, author of The Jumbies.

“I love this book! With a voice that’s original, hilarious, and so, so real, Lamar Giles’ Not So Pure and Simple is an exceptional treat from the moment it begins, and delivers a satisfying story all the way to the finish. And I didn’t want it to end.” — Olugbemisola Rhuday-Perkovich, author of Two Naomis

“With realism and humor, Giles paints the complicated, messy reality that many teens face in navigating sexuality, relationships, and the conflicting messages they receive from society.”  — Horn Book Magazine

All events will be held virtually until further notice.
END_OF_DOCUMENT_TOKEN_TO_BE_REPLACED