The Care and Management of Lies: A Novel of the Great War (Paperback) 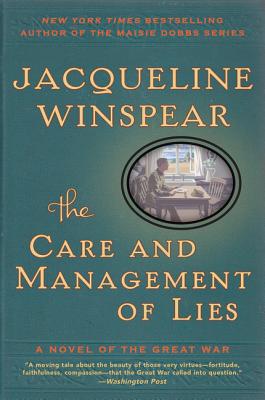 By Jacqueline Winspear
$15.99
Email or call for price.

“In this poignant portrait of the lives of two friends during the Great War, Winspear draws on her skill as a storyteller to illustrate the changes and opportunities these years brought to women. Kezia and Thea both had thoughts of being teachers, but the former marries Thea's brother, a farmer, and the latter becomes a suffragist and pacifist. Both women grow and change with their circumstances, and, like many stories of the Great War, this one is not without tragedy.”
— Raul Chapa, Book People, Austin, TX

The New York Times bestselling author of the Maisie Dobbs series turns her prodigious talents to this World War I standalone novel, a lyrical drama of love struggling to survive in a damaged, fractured world.

By July 1914, the ties between Kezia Marchant and Thea Brissenden, friends since girlhood, have become strained—by Thea’s passionate embrace of women’s suffrage, and by the imminent marriage of Kezia to Thea’s brother, Tom, who runs the family farm. When Kezia and Tom wed just a month before war is declared between Britain and Germany, Thea’s gift to Kezia is a book on household management—a veiled criticism of the bride’s prosaic life to come. Yet when Tom enlists to fight for his country and Thea is drawn reluctantly onto the battlefield, the farm becomes Kezia’s responsibility. Each must find a way to endure the ensuing cataclysm and turmoil.

As Tom marches to the front lines, and Kezia battles to keep her ordered life from unraveling, they hide their despair in letters and cards filled with stories woven to bring comfort. Even Tom’s fellow soldiers in the trenches enter and find solace in the dream world of Kezia’s mouth-watering, albeit imaginary meals. But will well-intended lies and self-deception be of use when they come face to face with the enemy?

Published to coincide with the centennial of the Great War, The Care and Management of Lies paints a poignant picture of love and friendship strained by the pain of separation and the brutal chaos of battle. Ultimately, it raises profound questions about conflict, belief, and love that echo in our own time.

Jacqueline Winspear is the author of the New York Times bestsellers The American Agent, To Die but Once, and In This Grave Hour, as well as thirteen other bestselling Maisie Dobbs novels and The Care and Management of Lies, a Dayton Literary Peace Prize finalist. Jacqueline has also published two non-fiction books, What Would Maisie Do? and a memoir, This Time Next Year We’ll Be Laughing. Originally from the United Kingdom, Jacqueline divides her time between California and the Pacific Northwest.

“Winspear has returned—via a good new, standalone, non-mystery novel called The Care and Management of Lies—to the wartime period that clearly continues to haunt her. In a publishing season crowded with commemorations of the outbreak of World War I...Winspear’s books more than hold their own.”
— Maureen Corrigan, NPR's Fresh Air

“Captivating….It is in Kezia’s imagination and kitchen where this tragic story of war, passion, love and friendship comes alive. Winspear illustrates how food-whether it’s imaginary or real-can provide the perfect amount of tenderness and compassion when it’s needed the most….A suspenseful wartime narrative.”
— San Francisco Chronicle

“Jacqueline Winspear is one of our best….Beautifully imagined and executed….As with every Winspear novel, there is beautiful writing-and in Kezia and Tom, two characters you won’t soon forget.”
— USA Today

“Fiction at once fresh and timeless, intimate and sweeping that chronicles the challenging friendship between a suffragist and a farmer’s wife….A rare stand-alone novel by the author of the beloved Maisie Dobbs series.”
— O, the Oprah Magazine

“In a stand-alone departure from her popular post-WWI mystery series featuring psychologist Maisie Dobbs, Winspear has created memorable characters in a moving, beautifully paced story of love and duty.”
— Booklist

“Winspear knows the history of the war that changed the world. In The Care and Management of Lies, she’s telling us the story, she’s bringing it home. Beautifully, tragically, indelibly.”
— Bobbi Dumas, NPR Books

“A winning stand-alone tale….While questioning war’s value and showing its terrible effects off the battlefield, Winspear fashions a stunning trajectory for her main characters.”
— Publishers Weekly

“Without questioning either the cause of the war or the dubious tactics employed…these characters simply get on with it, reaffirming our faith in the possibility of everyday nobility....A sad, beautifully written, contemplative testament.”
— Kirkus

“s much a story of the home front as of the battlefield, this new stand-alone novel is, above all, a moving tale about the beauty of those very virtues—fortitude, faithfulness, compassion—that the Great War called into question.”
— Washington Post

All events will be held virtually until further notice.
END_OF_DOCUMENT_TOKEN_TO_BE_REPLACED