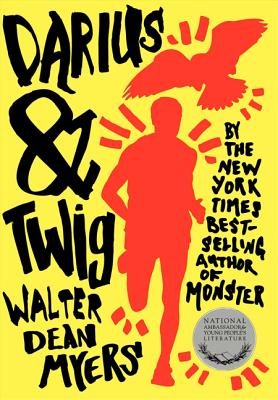 New York Times bestselling author and Printz Award winner Walter Dean Myers once again connects with teenagers everywhere in Darius & Twig, a novel about friendship and needing to live one's own dream. This touching and raw teen novel from the author of Monster, Kick, We Are America, Bad Boy, and many other celebrated literary works for children and teens is a Coretta Scott King Honor Book.

Darius and Twig are an unlikely pair: Darius is a writer whose only escape is his alter ego, a peregrine falcon named Fury, and Twig is a middle-distance runner striving for athletic success. But they are drawn together in the struggle to overcome the obstacles that life in Harlem throws at them. The two friends must face down bullies, an abusive uncle, and the idea that they'll be stuck in the same place forever.

Maria Russo, writing in the New York Times, included Darius & Twig on her list of "great kids' books with diverse characters." She commented: "The late Myers, one of the greats and a champion of diversity in children’s books well before the cause got mainstream attention, is at his elegant, heartfelt best in this 2013 novel. It’s about two friends growing up in Harlem, one a writer, one an athlete, facing daily challenges and trying to dream of a brighter future."

Walter Dean Myers was the New York Times bestselling author of Monster, the winner of the first Michael L. Printz Award; a former National Ambassador for Young People's Literature; and an inaugural NYC Literary Honoree. Myers received every single major award in the field of children's literature. He was the author of two Newbery Honor Books and six Coretta Scott King Awardees. He was the recipient of the Margaret A. Edwards Award for lifetime achievement in writing for young adults, a three-time National Book Award Finalist, as well as the first-ever recipient of the Coretta Scott King-Virginia Hamilton Award for Lifetime Achievement.

Myers has written another gritty, suspenseful, street-smart novel with a viscerally real setting in which young men must struggle to overcome obstacles by finding the best within them...Surely will inspire their readers to seek to do the same.
— Booklist (starred review)

All events will be held virtually until further notice.
END_OF_DOCUMENT_TOKEN_TO_BE_REPLACED