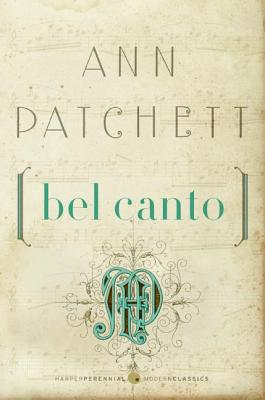 "Bel Canto is its own universe. A marvel of a book." —Washington Post Book World

A beautifully designed Harper Perennial Deluxe Edition of Ann Patchett’s spellbinding novel about love and opera, and the unifying ways people learn to communicate across cultural barriers in times of crisis.

Somewhere in South America, at the home of the country's vice president, a lavish birthday party is being held in honor of the powerful businessman Mr. Hosokawa. Roxanne Coss, opera's most revered soprano, has mesmerized the international guests with her singing. It is a perfect evening—until a band of gun-wielding terrorists takes the entire party hostage. But what begins as a panicked, life-threatening scenario slowly evolves into something quite different, a moment of great beauty, as terrorists and hostages forge unexpected bonds and people from different continents become compatriots, intimate friends, and lovers.

Patchett's lyrical prose and lucid imagination make Bel Canto a captivating story of strength and frailty, love and imprisonment, and an inspiring tale of transcendent romance.

Ann Patchett is the author of several novels, works of nonfiction, and children's books. She has been the recipient of numerous awards including the PEN/Faulkner, the Women's Prize in the U.K., and the Book Sense Book of the Year. Her novel The Dutch House was a finalist for the Pulitzer Prize. Her work has been translated into more than thirty languages. TIME magazine named her one of the 100 Most Influential People in the World. She lives in Nashville, Tennessee, where she is the owner of Parnassus Books.

“Elegantly alluring. . . . A novel that begins with a kiss and absolutely deserves one.” — Janet Maslin, New York Times

“One approaches the final pages with a heavy heart for several reasons, not the least of which being that this fine read has come to an end.” — Entertainment Weekly (A-)

“Bel Canto has all the qualities one has come to expect from a classic Ann Patchett novel: grace, beauty, elegance, and magic.” — Madison Smartt Bell

“Patchett’s ability to evoke sense of place. . .is near magical in itself.” — Publishers Weekly

“A novel that showcases [Patchett's] profound understanding of the heart.” — BookForum

“This fluid and assured narrative, inspired by a real incident, demonstrates her growing maturity and mastery of form as she artfully integrates a musical theme within a dramatic story.” — Publisher's Weekly

"Bel Canto by Ann Patchett should be on the list of every literate music lover. The story is riveting, the participants breathe and feel and are alive, and throughout this elegantly-told novel, music pours forth so splendidly that the reader hears it and is overwhelmed by its beauty. Ann Patchett is a special writer who has written a special book." — Lloyd Moss, WXQR

"Bel Canto invites readers to explore new and unfamiliar territory, to take some emotional risks rather than stand with Rolland among those 'already saved.'" — Chicago Tribune

"In more ways than one, Bel Canto is about finding beauty in unexpected places." — New York Magazine

“The author has taken what could have been a variation on the Lord of the Flies scenario and fashions instead a ’Lord of the Butterflies,’ a dreamlike fable in which the impulses toward beauty and love are shown to be as irrepressible as the instincts for violence and destruction.” — New York Magazine

"Patchett can be counted on to deliver novels rich in imaginative bravado and psychological nuance." — Publishers Weekly

"You'll find a few hours of entertainment and maybe even a strange yearning to be kidnapped." — Time Out New York

"A book that works both as a paean to art and beauty and a subtly sly comedy of manners." — The New York Times

"Combining an unerring instinct for telling detail with the broader brushstrokes you need to tackle issues of culture and politics, Patchett creates a remarkably compelling chronicle of a multinational group of the rich and powerful held hostage for months." — Kirkus Reviews

"Bel Canto moves elegantly through its paces, captors and captivates alike stumble on that most elusive liberty: the freedom to be." — New York Daily News

“A provocative and enchanting look at the power art has to suspend real life and to create a better world, one in which the differences between people can be erased and the barriers to our best selves can be hurdled.” — Detroit Free Press

“Bel Canto is its own universe. A marvel of a book.” — Washington Post Book World

Events may be virtual or in person. Please see details for each event.
END_OF_DOCUMENT_TOKEN_TO_BE_REPLACED