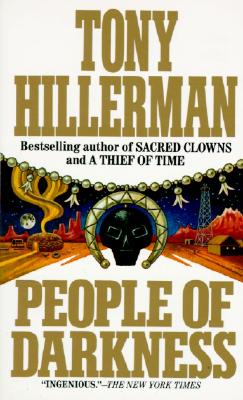 A dying man is murdered. A rich man’s wife agrees to pay three thousand dollars for the return of a stolen box of rocks. A series of odd, inexplicable events is haunting Sergeant Jim Chee of the Navajo Tribal Police and drawing him alone into the Bad Country of the merciless Southwest, where everything good struggles to survive, including Chee. Because an assassin waits for him there, protecting a thirty-year-old vision that greed has sired and blood has nourished. And only one man will walk away.

“The only mysteries I read are Hillerman’s.”
— Ursula K. Le Guin

“Hillerman deserves to be included in any list of the best living mystery writers.”
— Dallas Morning News

“Hillerman knows the value of suspense. He packs his scenes with tantalizing details, his detectives with intelligent persistency and his story with an understated sense of urgency.”
— People

"Hillerman gets better with every book."
— San Francisco Chronicle

"Hillerman is an expert puzzle-maker."
— The Atlantic

All events will be held virtually until further notice.
END_OF_DOCUMENT_TOKEN_TO_BE_REPLACED