Stupid White Men: ...And Other Sorry Excuses for the State of the Nation! (Paperback) 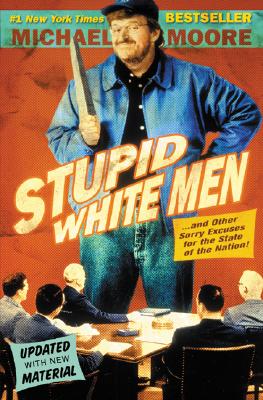 In the winter of 2002, Stupid White Men took America -- and the world -- by storm. Tired and skeptical of George W. Bush's high approval ating, frightened by the implications of the Enron scandal -- and generally just looking for a voice of honest dissent in the thick atmosphere of jingoism that followed 9/11 -- book buyers from coast to coast swiftly embraced Michael Moore's in-your-face anti-Bush-era manifesto, making it one of the bestselling nonfiction books of the year.

With an unerring eye for greed, hypocrisy, and corruption, Michael Moore takes on the whole ugly mess of America at the dawn of the twenty-first century. Whether he's demanding U.N. action to overthrow the Bush Family Junta or calling on African Americans to place whites only signs over the entrances of unfriendly businesses, Stupid White Men is a pitch-perfect skewering of our culture of Malfeasance and Mediocrity.

Michael Moore's first book, Downsize This!, was a New York Times bestseller in both hardcover and paperback. The award-winning director of the groundbreaking documentary Roger & Me, which became the largest grossing nonfiction film of all time, Moore is the creator and host of the Emmy-winning series TV Nation and The Awful Truth. Also the coauthor (with Kathleen Glynn) of Adventures In A TV Nation, he lives in New York City.

All events will be held virtually until further notice.
END_OF_DOCUMENT_TOKEN_TO_BE_REPLACED