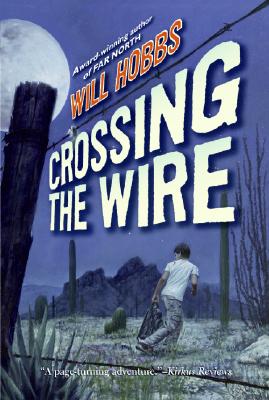 In this riveting, action-packed novel from award-winning author Will Hobbs, a teenage boy hoping to help his loved ones must fight for his life as he makes the dangerous journey across the Mexican border into the United States. This middle grade novel is an excellent choice for tween readers in grades 5 to 6, especially during homeschooling. It’s a fun way to keep your child entertained and engaged while not in the classroom.

When falling crop prices threaten his family with starvation, fifteen-year-old Victor Flores heads north in an attempt to "cross the wire" from Mexico into America so he can find work and help ease the finances at home.

But with no coyote money to pay the smugglers who sneak illegal workers across the border, Victor struggles to survive as he jumps trains, stows away on trucks, and hikes grueling miles through the Arizona desert.

Victor's passage is fraught with freezing cold, scorching heat, hunger, and dead ends. It's a gauntlet run by many attempting to cross the border, but few make it. Through Victor's desperate perseverance, Will Hobbs brings to life a story that is true for many, polarizing for some, but life-changing for all who read it.

Will Hobbs is the award-winning author of nineteen novels, including Far North, Crossing the Wire, and Take Me to the River.

Never Say Die began with the author's eleven-day raft trip in 2003 down the Firth River on the north slope of Canada's Yukon Territory. Ever since, Will has been closely following what scientists and Native hunters are reporting about climate change in the Arctic. When the first grolar bear turned up in the Canadian Arctic, he began to imagine one in a story set on the Firth River.

A graduate of Stanford University, Will lives with his wife, Jean, in Durango, Colorado.

“Provocative...puts a human face on the controversial issue of illegal immigration.”
— Booklist

All events will be held virtually until further notice.
END_OF_DOCUMENT_TOKEN_TO_BE_REPLACED